It had been a while since I’d ridden my mountain bike on the hills of Bukit Kiara here in Kuala Lumpur. And I was struggling, like I’d never struggled before. For the unfamiliar, mountain biking in short involves riding of bicycles off road, enjoyably on narrower trails, up and down hills, over and around rocks and roots and whatever comes in your path.

It was my first ride in Bukit Kiara since I returned permanently to Malaysia, following years of studying and working overseas. I had been in the country for only a couple of weeks and still had some residual fitness from living a relatively more active lifestyle overseas. I wasn’t yet displaying the full symptoms of the dreaded “balik Malaysia” syndrome; a mind and body lethargy caused by a combination of excessive eating, local food FOMO, hours of inactivity spent stuck in traffic and mums who spoil you. With this in consideration, it was the consensus of my riding companions I was being pathetically defeated by the local climate.

So here we are at “Pondok Guard” and the place is abuzz. I think if you live in the Klang Valley, you will be aware on how popular Bukit Kiara is as a recreational spot and green reserve. Walkers and joggers march past on the street by the number, a couple of road cyclists power up and over the hill. Finally, my people; mountain bikers, litter the edges of the street and the forest with our bikes chatting with each other or heading off into the nearby trails.

As a kid, I remember getting hauled out of bed by my mum at 5.45 a.m. so the family could go walking up the very same hill. Mountain bikers, back then were a rare sight. You’d spot the odd one disappearing into the bushes on a skinny, seemingly impossible by bike trail and magically reappear on a completely different side of the hill. Times have changed and on that day, Pondok Guard definitely seemed like the place to be if you were a mountain biker in Kuala Lumpur.

A commitment I made to myself when I decided to return home; was that I wouldn’t be “that” person. You know that person. That person who starts every sentence with “but when I was in…” and proceeds to proclaim how much better things were, wherever else they used to live. I’m going to excuse myself from this commitment to make a few observations about my fellow Malaysian mountain biker. 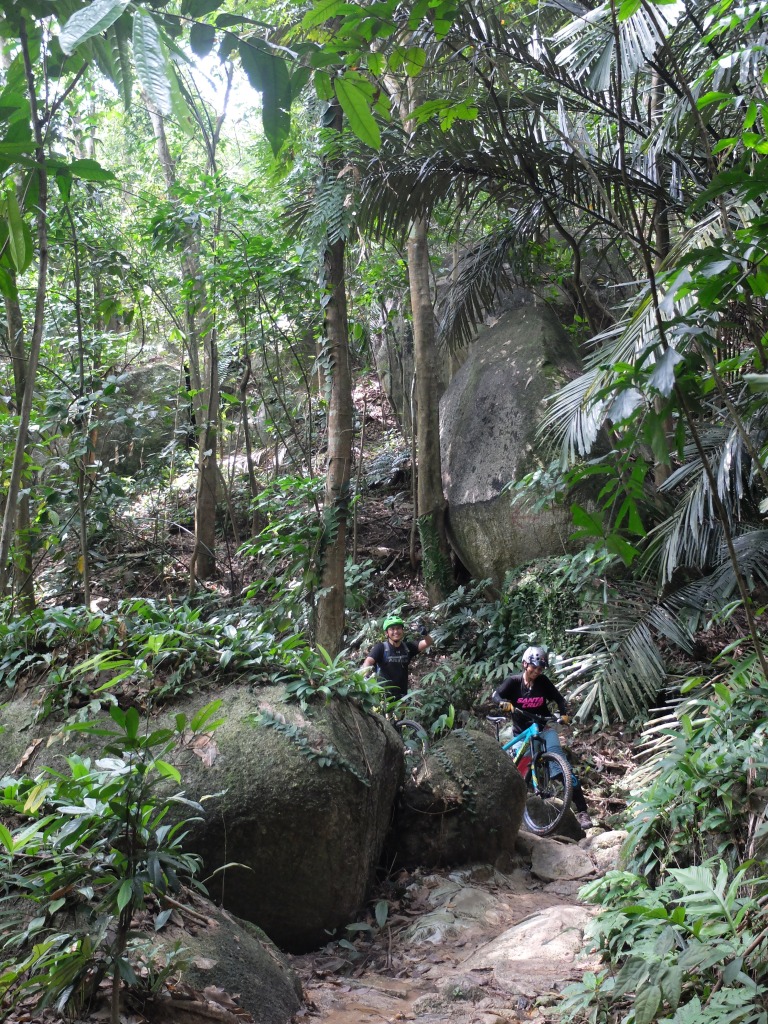 First, we love a good chat. I mean we really love multiple good long chats. I swear on that first ride we spent close to 45 minutes not just catching our breath but catching up with what seemed like every mountain bike owner in the Klang Valley.

In Australia, I regularly rode my bike with a large group of female friends. We often joked about the amount of chattering that went on during our rides. The amount chitchat back then is no match for what goes on at Kiara. Riding in Australia, despite being laid back and social; still involved being practically on the go for the length of the ride. Riding in KL, involves twice the amount of socializing. Cigarette and vape breaks are normal (tsk, tsk Malaysia). An amusing contradiction is how I’m usually the only person eating on these breaks. Don’t worry, we all make up for it, after the ride.

What I love about the community of trail users at Bukit Kiara, is how well we get along with each other. When you have different kinds of people sharing the same narrow trails, user conflict is a major issue. Living and riding in Sydney, careening down a trail and coming up against a bunch of hikers going the opposite way, would half the time end in some unpleasantness.

At Kiara, more often than not, encountering hikers going up when you’re going down usually results in a quick chat or friendly waves all round. When you overcome an obstacle on an ascent, an “Auntie” on her hike would supportively exclaim,

Auntie, you flatter me. 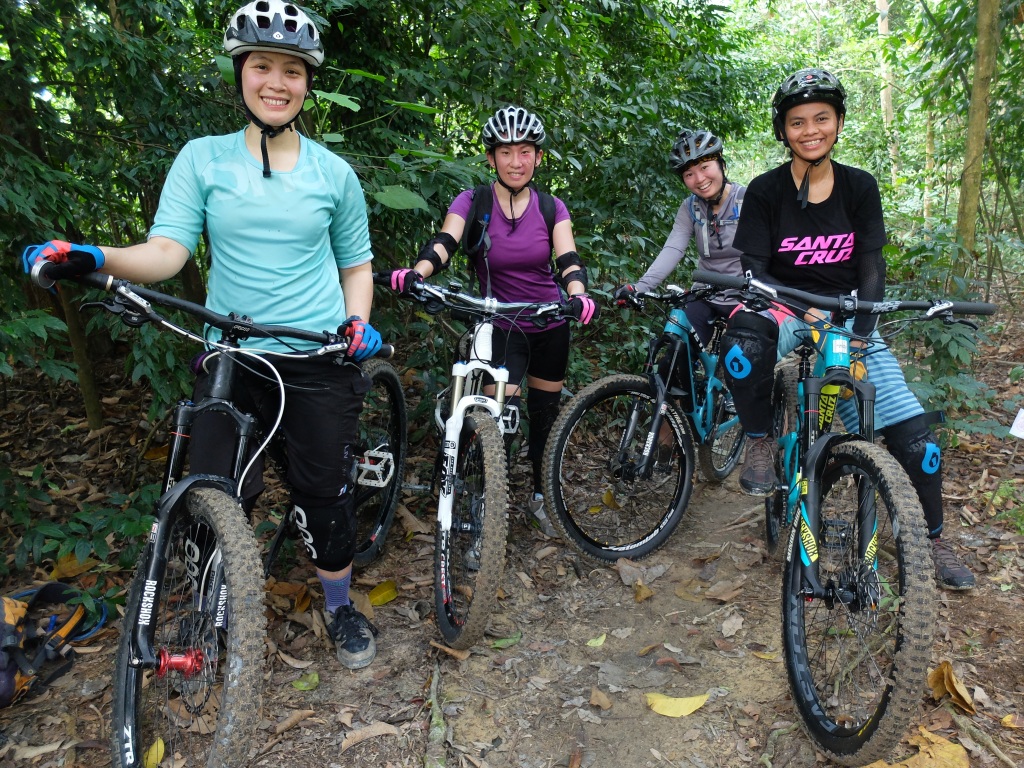 Politicking & stereotyping between different trail users and by policy makers can breed a culture of distrust; often resulting in areas being shut out to certain user groups. At times legitimate, other times a no win situation.

Here in Kuala Lumpur, I do believe that the harmonious co-existence between trail users is largely driven by the fact that we have so little green space to squabble over. Years of co-operation between community groups to fight for, protect and maintain Bukit Kiara would no doubt have a hand in this. Why fight with a fellow biker/hiker/local fauna, when there is constant threat of over development looming over all of us, slowly taking away what we commonly hold dear?

There is a lot to love about being a mountain biker in Malaysia. What I do love the most though, is how easily we all get along. A mountain biker is a mountain biker. Nobody could care less what race is printed on your I/C or which god you pray to, if at all. Out on the trails we chat, we laugh, we heckle, we encourage and we look after each other. It is a definite relief from the playing up of racial tensions and politicization of race relations we get bombarded with. It’s a much needed and welcome reminder that we are all people, looking to live life in peace and doing the things we love.

It’s been over 6 months since I returned to Malaysia. My friends from all circles never fail to ask me different variations of:

“So, had enough of Malaysia yet?”

I would be lying if I said all is fine and dandy in Malaysia at the moment. I laugh at my arguably poor timing of choosing to return to my home country. However,

returning home was not a decision I made overnight. I was determined to do it on my own terms and with no resentment or regrets. And yes, being able to continue mountain biking played a major role in my decision making process.

These are challenging times, but also exciting times to be in Malaysia. Life would definitely much less pleasant without my mountain biking community and my weekend green escapes. So, I don’t stress any more about the long breaks on my ride. It makes a lot of sense in our tropical climate. Long breaks aren’t as long as they used to be, we’ve realized it hasn’t done us too many favours. It also means more to talk at the post ride mamak.

Finally, my response to questions from my friends, on how I’m coping;

“It’s different. But it’s great to be back”

Bye bye picnic weekend.
Sunday story in search of dirt
Shop run
Goodbye weekend
Fridays at the local
I get around
Week 8 (I think?) of Sydney's lockdown and I think I've found more guerilla gardens and tiny parks in 8 weeks than my 5 (6?) cumulative years of living in Sydney.
The rest of Sunday's ride.
Lockdown rides
Sunday urban tours- back to school version
Photo 1 Family bike trip photo.
Farewell to our good friend Cik Jo.
Loading Comments...
%d bloggers like this: